De Lavie is high end furniture brand created by Treboll Móveis to sell our design furniture. Our company has been exporting furniture for more than 30 years. We currently export to Europe, North America and South America. At De Lavie each piece has its finished done individually and we use different types of materials (MDF, pine, leather, hardwood) to guarantee our furniture is unique. At Treboll we are also specialize in custom production for B2B partners, working with specific projects for each client, with the best quality in painted mdf and pine wood. 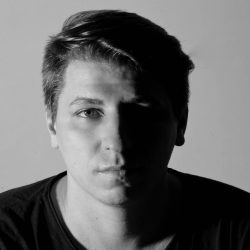 Bruno Faucz is from Santa Catarina (state of Brazil). He was born in 1986, he grew up with a pencil and paper always in his hand. Bruno graduated in Furniture Design in 2007 and he has a master’s program in Master International Design. He lived Design in the factory for 7 years, time when he applied design effectively in a vision applied to the production. He traveled around Brazil searching the aspects connected to the “moment of buying”. In 2013 Bruno started his on Design Studio. Studio Bruno Faucz is based in three cornerstones: Market- Industry – Design, always willing to bring products that are complete in all their stages, from the production to the everyday use in the house of the people. In the first year of the Studio, Bruno Faucz was invited to exhibit at Design Weeks in Sao Paulo, New York city and Paris. He had more than 120 releases until 2015 in the best magazines of House and Decor sections. It’s worth mentioning the highlight to Canela chair that is in “Design Brasileiro de móveis” book (Brazilian Furniture Design) that features the main seat pieces from 1928 to 2013. In 2014 and 2015 he was the jury of Casa Cor Santa Catarina, the biggest event of interior architecture of the country, where he attended a Talk Show with great journalists and professionals of the area. He began 2015 exhibiting in Brazil S.A and in iSaloni in Milan. He also exhibited in EXPO in the same city, an invitation of Arthur Casas Architecture Office. In May he ended his first semester exhibiting his pieces in ICFF in NYC and in September of the same year he exhibited again in Joseph Galerie during Paris Design Week. Bruno defines Design as “the materialization of the information”, because he believes that a good project is conceived based in information collected from a big variaty of fields of knowledge.